→ Mosquitoes are a group of more than 3,500 species of dipteran (two-winged) insects, belonging to the family Culicidae. About 60 mosquito species have been recorded in Slovakia.

→ The gonotrophic cycle of mosquitoes consists of 4 stages: egg, larva, pupa and adult (imago). The larvae hatch from eggs and molt 3 times (they have 4 stages – instars) before they pupate.

→ They feed on small food particles of plant and animal origin, which they filter from water. They breathe atmospheric oxygen while hanging on the underside of the water surface.

→ The development of larvae lasts from 6 days in warm water to 2 months in cold water. The last larval stage pupates and the pupa changes into an adult (imago) after about 2 days.

→ There are about the same number of females as males. Both sexes feed on plant nectars. They mate in flight, the female is mating only once, the male can mate more than once.

→ After mating, the females of most species must suck blood for their eggs to mature. They search for hosts through smell (they are particularly sensitive to CO2 and some components of breath and sweat), heat receptors and vision.

→ They are particularly active at dusk or dawn; most species avoid direct sunlight. They can’t fly in windy weather. The female lays 50-500 eggs 2-4 days after sucking blood. The eggs are either laid directly in water, where they begin to develop immediately (genera Culex, Anopheles, Culiseta), or are laid in moist soil, where they wait until they are flooded (genus Aedes).

→ The first group includes the so-called house mosquitoes, which reproduce in various tanks (rainwater barrels, vases in cemeteries, water in discarded tires, swimming pools, ponds, etc.). The second group includes the so-called flood mosquitoes, which reproduce in masse after floods and cause mosquito calamities. Mosquitoes are important vectors of pathogens, killing several hundred thousand people every year. Although they also transmit the pathogens of several diseases in our country, fortunately, the deadly and most dangerous ones do not occur here.

BTI – what is it and how does it work?

Bti is the abbreviation for the soil bacterium called Bacillus thuringiensis israelensis. Since Bti is highly toxic to mosquito larvae, Bti-based preparations are used for biological control of mosquitoes. Biological control of mosquitoes means using other organisms to reduce the number of mosquitoes. Bti-based preparations are applied in the form of a solution or granules to the places where mosquito larvae are developing. Their advantage is that they are selective and therefore toxic only to mosquito larvae and a few of their close relatives. Bti has no effect on non-target organisms, including fish and humans.

What makes Bti so selective? The bacterium produces a protein toxin which on its own is harmless. It must first enter the intestine of the host organism, which must have a highly alkaline environment (pH> 10). In order for the protein toxin to be activated, it must come into contact with enzymes that convert the otherwise harmless bacterial protoxin into a biologically active toxin. At the same time, there must be receptors in the gut to which the toxin binds. And mosquito larvae happen to meet these conditions. Subsequently, the toxin causes the intestinal cells to swell and rupture, causing the intestine to puncture and the host to die within a few hours of the toxin being consumed by the mosquito larva.

The research work package includes three different methods to monitor mosquito populations, to investigate potential health risks posed by viruses and parasites and to monitor bioregulation of mosquitoes using BTI. For successful scientific research and monitoring, it is essential to achieve efficient and close cooperation between biologists, experts and volunteers from Slovakia and Austria.

Mosquito larvae
Standardized digital or paper-based data entry forms are used by volunteers and experts to document the number of in the entire region and, if necessary, the number of larvae is regulated using BTI.

Adult mosquitoes: CO2 traps
CO2 traps are used to catch adult mosquitoes in wetlands as well as in villages/cities. The caught mosquitoes are counted, their species is determined, and they are classified as flood, fever and house mosquitoes.

Invasive species: ovitraps
Ovitraps (artificial egg traps) are installed and checked every 2 weeks by biologists and inspected for invasive mosquito species by experts from Comenius University (SK) and in cooperation with AGES (AT).

Mosquitoes as vectors
A few hundred aggregate samples (pools) are checked for West Nile virus, Usutu virus and parasites of the genus Dirofilaria by biologists of Comenius University using biomolecular methods. The required samples are provided by experts from Slovakia and Austria.

Mosquitoes have many natural predators; predators of larvae and pupae are generally more effective than predators of adult mosquitoes because larvae and pupae are found concentrated in breeding sites while adults are dispersed in the environment. Among the predators of larvae, the most effective are fish – depending on the species and size, fish can consume hundreds to thousands of larvae per day. Mosquitoes do not survive where there are fish. Although some may manage to escape from the fish in the dense aquatic vegetation, those numbers are small. Mosquito larvae are also an important food for the protected newts, for instance. One newt eats hundreds of them a day. Many species of aquatic insects also feed on mosquitoes, such as aquatic true bugs, dragonfly larvae, predacious beetles (diving beetles, water scavenger beetle, whirligig beetles), which can eat from one to dozens of larvae per day.

When away from the water, mosquito predators include spiders, dragonflies, frogs, bats, and many species of insectivorous birds, such as swifts. By creating suitable conditions for natural predators, we help reduce the number of mosquitoes. However, some mosquitoes breed in places where there are not many predators. In addition, the larvae and pupae are present in such quantities that if they were discovered by predators, they would not be able to eat them all. This survival strategy is used by flood mosquitoes, which multiply in flood waters that last only a short time and then dry up. In such cases, the only effective aid is the use of parasites, including Bacillus thuringiensis israelensis. 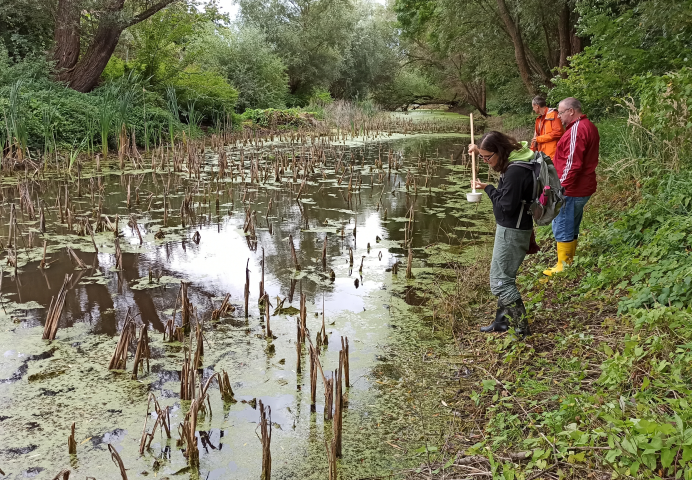 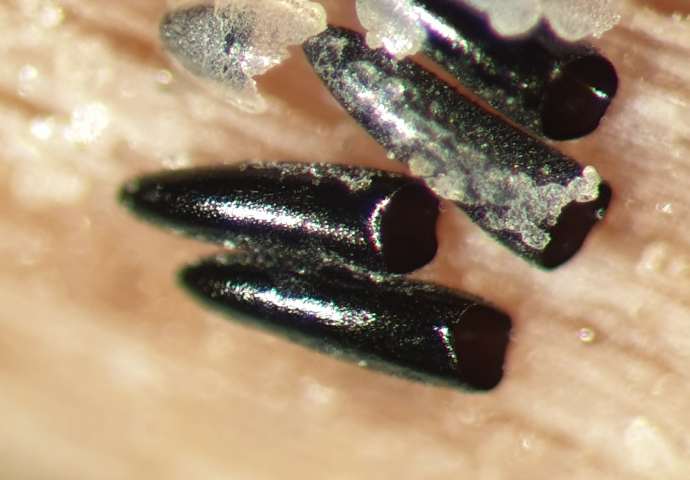 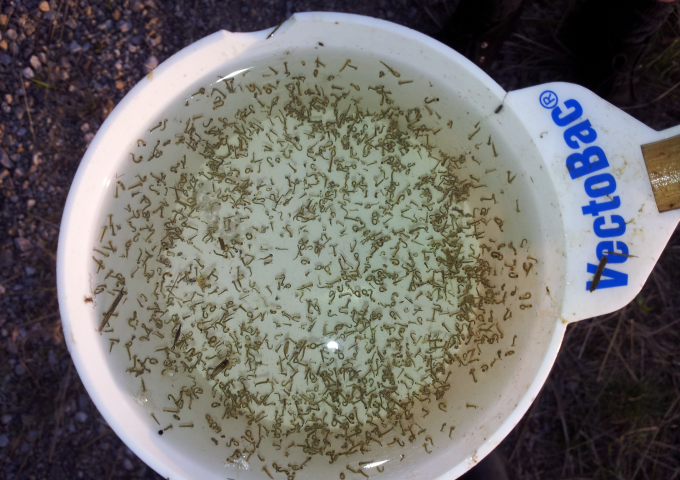 The population of the Morava-Thaya wetlands on the Austrian side has benefited from biological mosquito regulation for more than a decade: In 2011, the Austrian municipalities of Rabensburg, Hohenau an der March, Ringelsdorf-Niederabsdorf, Drösing, Jedenspeigen, Dürnkrut, Angern an der March, Marchegg and Engelhartstetten founded their own association to control the mosquitoes in the Morava-Thaya floodplains.

The association organizes the work of our volunteers under the professional guidance of a biologist. They do extremely valuable work and have already completed numerous assignments – they have been in action 655 times since 2017 alone! 889,312 mosquitoes were caught in more than 1000 mosquito traps and identified in our laboratory. This means that our knowledge about this insect species is also growing steadily.

With the Interreg project “Mosquito Bioregulation”, there is now international cooperation which allows us to learn from and support one another. Cross-border measures are essential in the fight against mosquitoes because mosquitoes know no borders!